In the Triangle, the center of activity, adjacent to the Manawa Municipal Building, stand a couple must-see 19th Century classics; the Victorian-era Bandstand and Frederick Remington’s heroic sculpture “The Bronc Buster”.  Also on the Triangle Park is the Melvin O. Handrich Memorial.

• Frederick Remington created the first Bronc Buster sculpture in 1895.  This replica was put here in Manawa, WI on June 29, 2000.  The plaque at the statue reads: “Bronc Buster Frederick 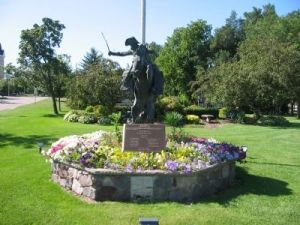 Remington, sculptor.  The Manawa Area Chamber of Commerce is proud to dedicate this statue to the City of Manawa.  We are grateful to all who contributed to help bring this beautiful statue to our “Rodeo City”.

• The bandstand is the host to many outdoor concerts given by members of the community and it is also used for the high school homecoming ceremony every year.  If you are interested in using the bandstand or would like more information about it please contact the City Hall at 920-596-2577. 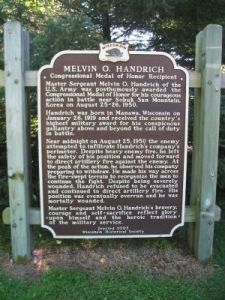 The inscription on the sign. Master Sergeant Melvin O. Handrich of the U.S. Army was posthumously awarded the Congressional Medal of Honor for his courageous action in battle near Sobuk San Mountain, Korea on August 25–26, 1950.  Handrich was born in Manawa, Wisconsin on January 26, 1919 and received the country’s highest military award for his conspicuous gallantry above and beyond the call of duty in battle.  Near midnight on August 25, 1950 the enemy attempted to infiltrate Handrich’s company’s perimeter. Despite heavy enemy fire, he left the safety of his position and moved forward to direct artillery fire against the enemy. At the peak of the action, he observed his company preparing to withdraw. He made his way across the fire-swept terrain to reorganize the men to continue the fight. Despite being severely wounded, Handrich refused to be evacuated and continued to direct artillery fire. His position was eventually overrun and he was mortally wounded.  Master Sergeant Melvin O. Handrich’s bravery, courage and self-sacrifice reflect glory upon himself and the heroic tradition of the military service.  It was erected in 2003 by the Wisconsin Historical Society.

Mayor's Office:
Monday - Thursday
7:00am - 9:00am
Fridays by appointment only